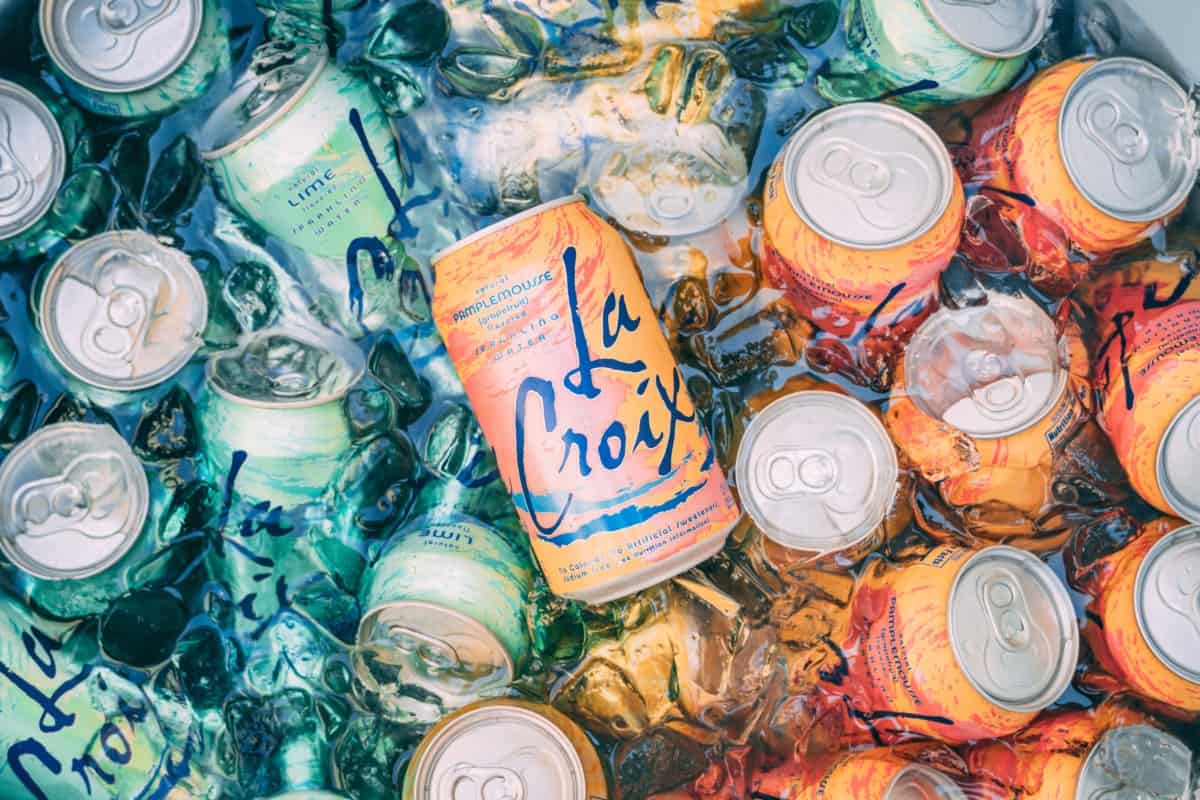 Most people instantly assume drinking sparkling waters is going to be healthy for them but this isn’t as clear cut as you’d think.

Or maybe you heard the rumors that carbonated water might cause tooth decay, is highly acidic and might even be fattening.

But drinking sparkling waters is going to be much better for you thank drinking sugary beverages such as soda, diet soda, fruit juices, sports drinks, and alcohol.

But is this zero sugar and zero carbs drink too good to be true?

There’s no doubt drinking some carbonated water is going to be a lot less boring than drinking flat plain tap water. There are more and more people drinking it every day and Americans are spending hundreds of millions per year on it.

I know it’s easy to assume drinking sparkling waters are healthy for you but here you’ll discover all the real science-backed answers to the rumors. 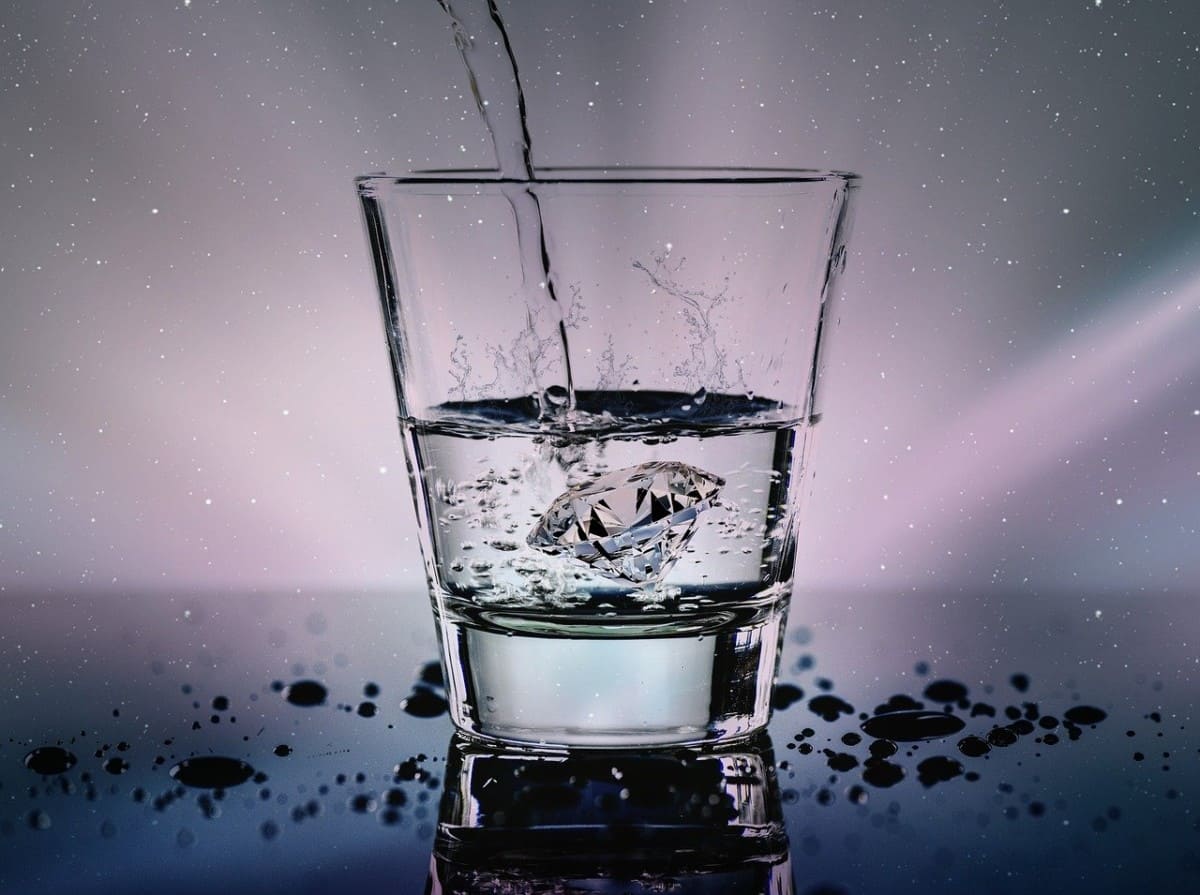 Everybody knows drinking water is one of the healthiest things you can do for your body. But there are also a lot of people who don’t like to drink hydrating tap water, especially in the morning. So drinking some carbonated water is a quick way to help rehydrate your body than not drinking any water at all (1).

Unlike highly caffeinated beverages you shouldn’t have an increase in urine after drinking carbonated water. Plus you’ll lose more weight from skipping sugary beverages like sodas, sports drinks, and fruit juices. If you’re addicted to drinking any of those sugary or artificially sweetened drinks then you’ll be 100X better off with carbonated waters.

Natural Spring Mineral Waters. This is my favorite source of sparkling water. Perrier and San Pellegrino contain naturally occurring minerals such as calcium and magnesium. They also often come in a glass bottle so you won’t have to worry about BPA contamination. Mineral waters are the best in my opinion.

Club Soda. This is seltzer water like bubbled water that contains no sugar. It has some mineral-like substances such as sodium bicarbonate and potassium sulfate added to it to create the mineral’s taste.

Tonic. Stay away from this stuff as it contains sugar and/or high fructose corn syrup. This is the bad kind of carbonated water. 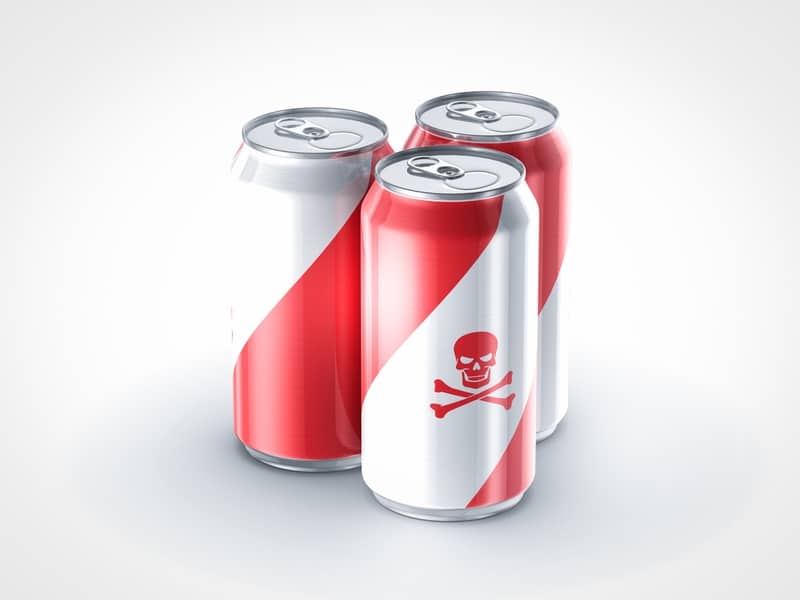 One of the main reasons you see people drinking so many carbonated waters is because they think it’ll help them lose weight while still getting their bubbly water fix. It’s going to be a much healthier option than drinking soda or diet soda. But is it a clear cut way to lose weight or is it fattening?

Your first step is to check the ingredients label on the back of the can. This is to make sure they haven’t sneakily added sugars or other kinds of nasty sweeteners to it. “Natural flavoring” can mean lots of things and it doesn’t guarantee it’s going to be healthy for you. The back of the label should only have carbonated water as the ingredient.

Artificial sweeteners such as sucralose are often found in carbonated waters as well. Studies have linked these artificial sweeteners to increases in weight gain, neural problems, and worse gut health (2,3,4). Citric acid is a sweetener often used in fizzy water that is linked to tooth erosion (5).

One study followed rats drinking sparkling water and found those who did drink it ended up gaining more weight than those drinking regular water (6).

Canned carbonated waters often contain BPA or similar chemical substances such as BPS or BPF. So just because carbonated water is labeled as BPA-Free doesn’t mean that it doesn’t contain any of these endocrine disruptors. BPS and BPF vary very little compared to BPA so you’ll get the same endocrine-disrupting effect from drinking out of cans containing these similar substances (7).

BPA (and similar substances) have been linked to many health problems including hormone dysregulation, altered fetal development, and poor gut health (8,9,10). Hormones play a big role to improve weight loss, weight gain, and the health of your gut. Ensuring the can you’re drinking your carbonated water out of doesn’t contain BPA or similar substances is important to your long term health and improve weight loss.

It’s a smart idea to make your own carbonated bubble water in a SodaStream machine that uses BPA, BPS & BPF free containers.

Satisfies Hunger but Increases It at the Same Time? 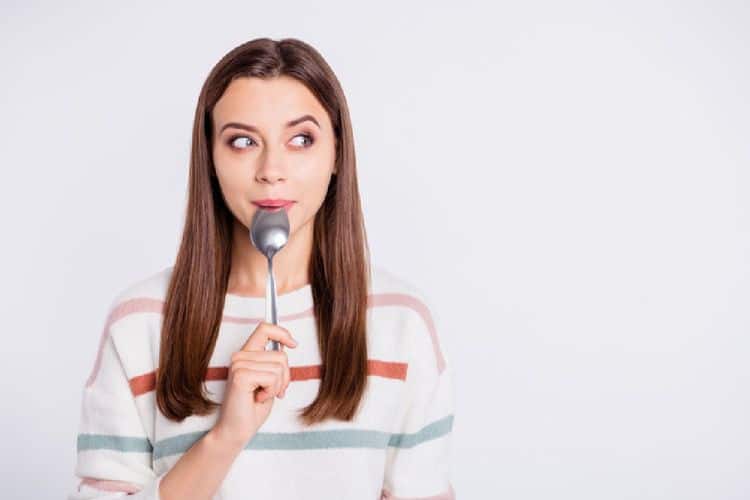 One way to crush down the feelings of hunger when you’re dieting or Intermittent Fasting is to drink these hydrating zero-calorie carbonated waters. The bubbles in these sparkling waters will help to make you feel fuller for longer.

Studies have found drinking bubble water will help with your satiety by allowing the food you just ate to stay stored in your stomach for longer (11). And it doesn’t take a rocket scientist to know the more full you feel the less you’re going to be tempted to eat more. This can improve your weight loss.

Now, this doesn’t mean this animal study will translate over to humans. And there isn’t yet a whole lot of research done on the topic. But at the very least keep it in the back of your head and hopefully, more future evidence comes out.

Too Acidic = Bad For You?

I know some believe the pH balance in your body can be negative or positive impacted by the foods and drinks you consume. The truth is your liver and kidneys will be able to filter out much of these highly acidic foods to naturally rebalance your internal pH levels.

With that said if you have digestive issues such as acid reflux then it’s probably best to not drink a whole lot of sparkling water. The carbonation (carbonic acid) in sparkling waters can make you feel gassy or bloated since you are putting CO2 (carbon dioxide) gas bubbles into your stomach. Or if you suffer from IBS then putting more acidic foods into your digestive symptom probably is a weak idea.

The truth about carbonated water damaging your tooth enamel is only slightly true. Studies have found carbonated water to only be only a little worse than drinking regular water (15,16). But there is a more recent study finding the carbonic acid in sparkling waters could damage sealed tooth enamel (17).

With that said make sure the bubbling water you’re drinking contains no sugar as this will damage your teeth. No sugar-added sparkling waters might only be damaging to your teeth minimally. So if it’s a choice between drinking sugary soda pop or a zero-calorie sparkling water then I’d go with the latter every day of the week. You should be fine as long as you’re brushing your teeth and eating a nutrition plan high in nutrient-dense foods.

How to Make Your Own Sparkling Water for Cheap 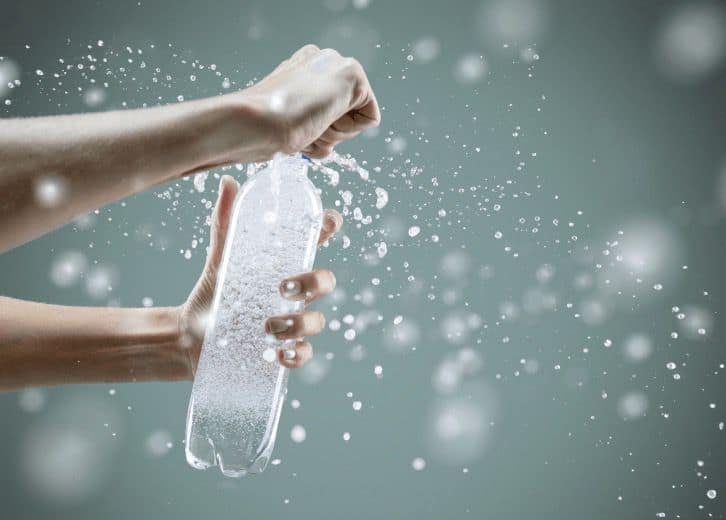 I invested in a SodaStream machine since I was getting tired of running out to the store, paying a lot of money for water with bubbles in it and then having to lug the giant pack of cans back to my car. So a SodaStream is a wise investment if you’re drinking a lot of sparkling water at home. I’ll keep a couple of their BPA, BPS and BPF free containers filled with spring water in my fridge. Then after making the bubble water, I’ll add in some stevia-sweetened flavoring.

The only problem is SodaStream like to charge an arm and a leg to refill their CO2 container. Plus stores will usually be sold out by the time I arrive to exchange it. So instead I picked up this small adapter you can put on the SodaStream container to refill it in a paintball can recharger at your local sporting goods store but at a fraction of the price. Nowadays it costs $20+ to exchange a SodaStream CO2 container but you can refill it this way for about $5. Or if you have extra paintball CO2 containers you can use this adapter to plug it into your SodaStream machine.

Is sparkling water as good for you as regular water?

Yes, if you’re trying to lose weight then drinking sparkling waters is going to be a much better choice than a soda, diet soda, sports drinks like Gatorade and Vitamin Water (18), fruit juices (19) and alcohol. Just make sure the can you’re drinking the sparkling water out of has no added ingredients and doesn’t contain BPA. Check out some more of my favorite weight loss drinks too.

Sparkling water is the next best thing to natural spring water. I know a lot of people don’t want to drink plain water all the time so drinking sparkling water like Pellegrino is going to be perfectly fine and welcomed addition to your nutrition plan.

Drinking sugary beverages is one of the big causes of weight gain and long term serious health problems like diabetes (20). The better you can eliminate those the better. So if sparkling water helps you cut those other bad beverages out of your life the better off you’re going to be.

I encourage all of my clients new and old to switch to zero-calorie sparkling water to get their bubbly water fix. It’s a significantly better option that’ll help you lose weight and stay hydrated.

So is sparkling water good for you? Yes, it is but just make sure to read the label first and you’re better off making it yourself at home.